Losers Have Just Recovered while New Users are so Lucky

Before closing last week on Thursday, Forex Trend Detector EA managed to achieve a surge in trading accounts across the entire Forex market. It could perfectly determine a near-bearish dominant volatile market trend, successfully identified its volatility borders, kept watching these borders where it comes close to the important market levels. 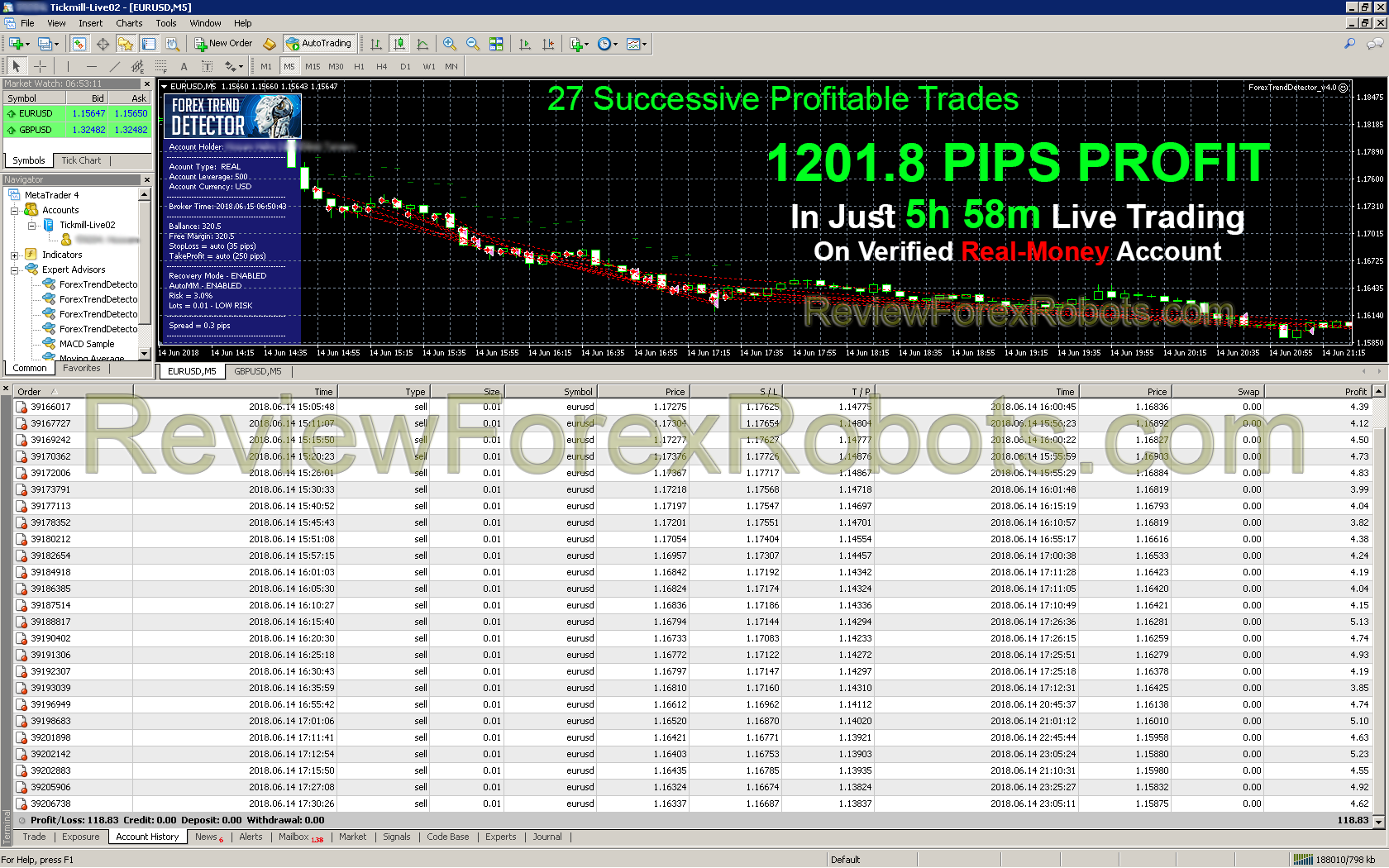 An important volatility breakout has occurred and Forex Trend Detector EA didn't miss it, it has then taken the opportunity and executed multiple (more than 25) successive trades after calculating the most possible profiting price levels that could occur on market reversal, and this was a success! 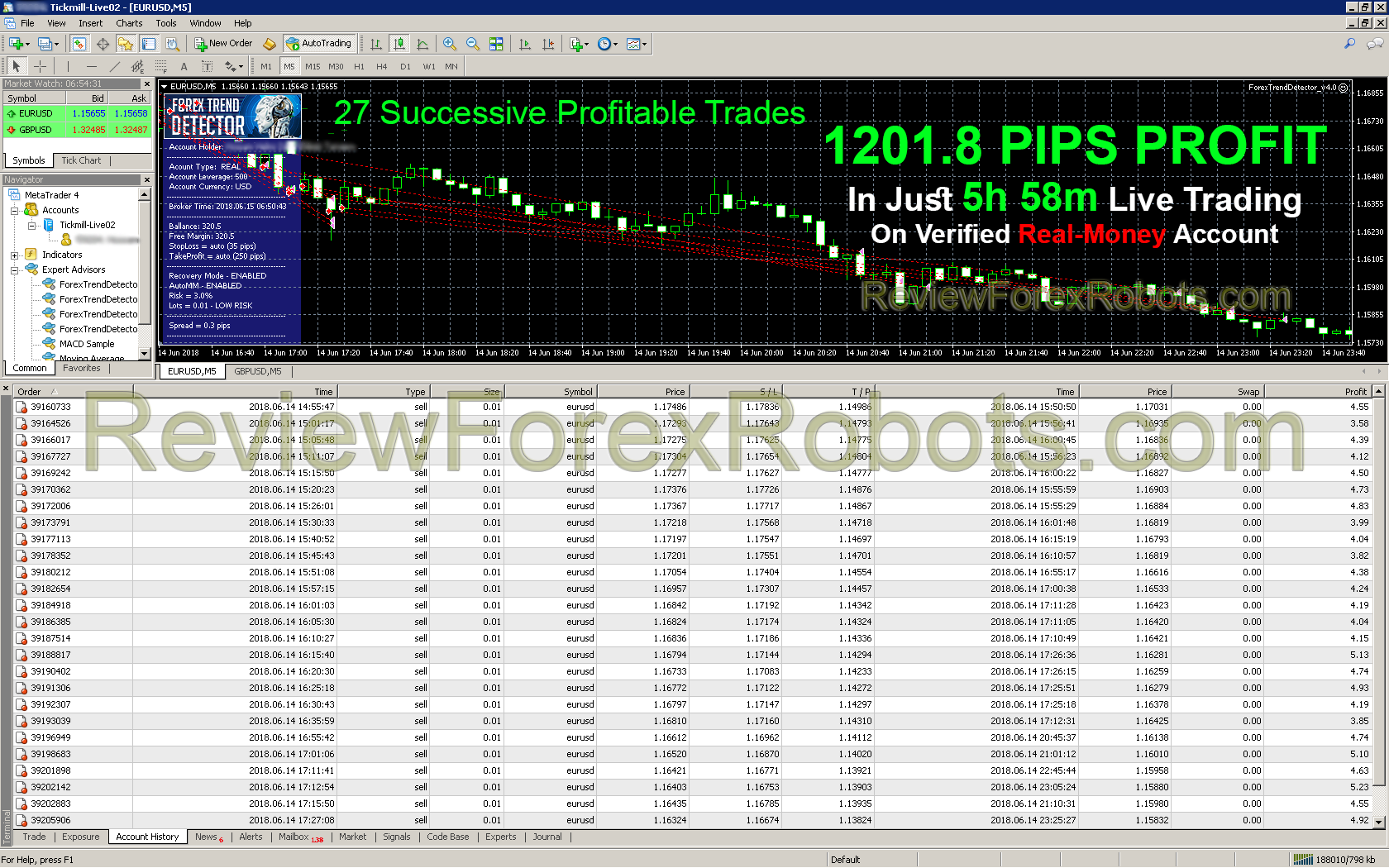 A sum of 1201.8 pips has been gained last week with an average win of 44.51 pips into multiple Forex accounts allover the world thanks to Forex Trend Detector EA. All were short trades on EURUSD the best of which could make a profit of 52.3 pips while the worst made 35.8 pips, the shortest of which took about 25m while the longest took about 5h 58m to be accomplished.

The existing Forex Trend Detector winner traders should have passed a special weekend celebrating their last profit, its loser traders have now recovered their losses while the new users of the EA are so lucky getting their copies running on the last Thursday.

Losers Have Just Recovered while New Users are so Lucky An important volatility breakout has occurred and Forex Trend Detector EA didn't miss it, it has then taken the opportunity and executed multiple (more than 25) successive trades after calculating the most possible profiting price levels that could occur on market readjustment, and this was a success!
Forex Trend Detector New Version 4.0 Has Been Released A new version 4.0 of Forex Trend Detector has just been released by FxAutomater Developers team with many great features and additions, it has been significantly improved over the older version 3.0 and is now available for download for all the existing members and new purchases via the official website members' area!
Forex Trend Detector v3.0 EURUSD 2 Years Visual Backtest Video This Backtest was for Forex Trend Detector v3.0 on EURUSD using a spread of 1.0 in a 99% Modelling Quality Dukascopy Tick Data Via a Tickmill ECN-PRO Demo Account
VERIFIED +927 pips $1245 in Just 3 Days on a REAL ACCOUNT Forex Trend Detector has gained +927 pips; a sum of +$1245 in 18 consecutive profitable trades just in 3 days of live trading on the EA developers Official Real Money Account verified by MyfxBook
Forex Trend Detector Amazing Profitable Day Forex Trend Detector +664 pips, $930 pure profit, Amazing Profitable Day, Verified Real Money Account by MyfxBook
Trading with Smart Money and Volatility Breakpoint Market experienced trades use an almost sure-fire trading strategy that enables them to gain large profits from high volatility currency pairs. This strategy is described as "following the money" and it's so simple