It opens positions on major support / resistance levels, and manages them with an intelligent and adaptive StopLoss system. No martingale, no grid, only in trades for less than a minute!

Everex Elite is a unique Expert advisor with an adaptive StopLoss system! It isn't a grid machine or a martingale strategy! It manages all of the positions in every single tick!

The whole strategy is up to date with the latest developments included. The working core of this Forex robot is market resistance levels based. Over the past years Everex Elite trader / coder team have successfully developed a continuously adaptive StopLoss system that required statistics generation and in depth analysis aided by various advanced mathematical software applications. Another scientific approach was mathematical connections search in the Forex market data dynamics and analyzing them depending on a variety of new generation mathematical researches like Neural Networks, Reinforcement Learning, Support Vector Machines and many others.

Generally, Everex Elite is in trade only for 30 seconds, an enough period for its intelligent StopLoss system to analyze, evaluate and react to all market movements to generate the required data to modify the StopLoss value about 20-30 times during every trade. This all grants the ability of Everex Elite to be constantly profitable in the previous 6 years.

In addition to the powerful strategy of the robot, several plus features were added to it in order to best serve the traders, including the following:

If there is any disconnection or miscommunication between the broker and the MetaTrader Everex Elite detects it and restarts. This is an automated program feature, you should not do anything.

Widening spreads during certain periods is one of the most popular tricks and can cost traders a lot of money. Everex Elite monitors the spread continuously and in case the spread goes above the allowed maximum value it disables trading temporarily until the spread goes back to normal. As the result you never need to be worry that Everex Elite places a trade when the spread is unacceptably high.

Adaptive StopLoss system is a unique and very powerful feature. Depending on the market conditions the Everex Elite adapts stop levels automatically. It ensures that stops are placed as close as possible without being too close. This is so beneficial for the trader by making the highest possible profits while the drawdowns are at the lowest possible value.

Managing risk exposure smart is essential for every successful trader. That's why Everex Elite comes with a built-in money management. It manages risk and trade size according to your setup and available balance.

If you are running another EAs simultaneously, Everex Elite automatically checks the margin before placing orders to avoid margin call.

You can set the possible maximum Drawdown with BalanceRisk. For example if you set BalanceRisk to 0.15 then after losing the 15% of your balance, Everex Elite will stop trading until you restart it.

The program has a built in graphical user interface, which can help you following its running and status.

Cyrus Chan Sat Apr 23rd, 2016
This EA is either a scam or useless.
First, even on demo result, the published result is a big difference from real demo result no matter on Tickmill or RoboForex: See https://www.mql5.com/en/signals/111746.
And on real money account, the real result is far worse than demo account.
Contact me if you need real myfxbook trading records.
I followed their customer service advice. Run a demo on RoboForex using Contabo VPS. The result tested is even worse than running on Tickmill.
Waste my time and money! 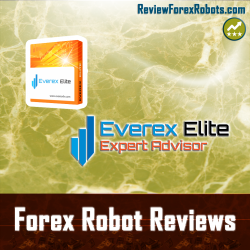